Only 38% of companies are confident they know why their customers choose their brand. Neil Owen explains how customer segmentation can help B2C and B2B companies alike. 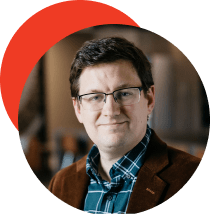 Customer segmentation, at its core, is about answering a simple question: “Who are your customers, and why do they buy your products?”

The answer sounds obvious—but getting it right is essential. You can’t improve your business if you don’t understand your customers. And, according to a troubling study by Forrester, most brands don’t. Only 38% of companies can confidently say that they know why their customers choose their brand.

Neil is our data guru. He developed Ntara’s proprietary customer segmentation process. With this methodology, Ntara has helped businesses unlock millions in revenue. In one case, a client yielded a 50,000% ROI.

If you didn’t attend the Curiosity Conference, here are some the key takeaways from his talk.

“Data is the best path to truth,” Neil says.

Many companies think they know who their customers are but have never tested their theories through data analysis. Instead, they build perceptions of their customers based on old narratives, anecdotal experiences, or on the word of panicked employees telling an executive what they think he wants to hear.

It’s not necessarily malicious, Neil says, but it’s not always the truth. And sometimes, that idea of who your customers are can prevent a brand from building success.

Case in point: Ntara once ran an nSight Customer Segmentation Study for a lodging company. Initially, they believed their customers had no interest in booking their reservations online—purely because of an anecdote.

“There was this great story of a person who actually walked to the front desk and paid with change,” Neil says.

The story made a stir in the company. It left them convinced that all their customers were exactly like this one who’d paid his bill with a jar full of coins. And they bought into that idea so fiercely that they were letting it limit their brand.

But Ntara put the idea to the test. With the help of SurveyMonkey, we ran a customer segmentation study, identified their personas, and created customer journey maps that led them to choose this brand.

The personas that provided the most value to the brand, they found, weren’t paying with penny jars. They were open to booking reservations online. And once the business understood who they really were, they could reach them in the way they wanted.

Just because one customer pays with a penny jar, Neil says, doesn’t mean he’s the majority of your customers—or that he’s your best customer, either.

“Don’t settle for the ‘we’ve always done it this way’ mentality,” Neil says. “People change.”
That lodging company used their customer segmentation data to drive change, and it had a huge impact on their bottom line.

“Before we engaged, they were lucky to hit a couple hundred thousand dollars a year,” he says. “By the end, they were doing more in a month than they were in a year before.”

But customer segmentation isn’t just for consumer businesses. B2B companies need to understand their clients, as well. And they need to be able to turn that data into an actionable strategy.

Neil broke down how Ntara helped a B2B company interested in dipping its toes into ecommerce. They needed to understand what their customers wanted—but they also needed turn that insight into profit.

We surveyed their clients to find out who they were, what their respective journeys looked like, and what they each needed from the company. Then, we set our sights on learning how much value each customer represented. So, we looked at the features each customer requested. We weighted those features against their increased spending requirements and the total company revenue.

“We were able to go in and identify the real feature value,” Neil says.

With a simple graph, the company could see what their customers wanted and how much value each opportunity would bring their company. They could easily, clearly identify the best steps to turn all that data into real, productive change.

According to a SurveyMonkey poll, 42% of people prefer data presented in charts, graphs, or infographics. Y’know – like this one:

But Neil says: “There are even better ways to do that.”

Ntara doesn’t stop at a single piece of data that fits into a pie chart. We take data from “just about everything we can get our hands on,” he said, and leverage it into a real understanding of our clients’ businesses and their customers.

As an example, he told the story of a client who, among other things, needed to know where to hold training sessions. Ntara found the answer with two simple survey questions. We asked participants how far they’d be willing to drive and the month that worked for them.

They’re easy questions—but with the help of some of the features in SurveyMonkey and Tableau, we got real, solid answers.

“We were able to encode the GPS coordinates of each of the respondents,” Neil explains. By plugging those data points and the survey answers into Tableau, he says, “we were able to generate not just a bar graph but a heatmap.”

The power of personas and journey maps

Know your customers through research

The value of research

Get our latest insights, ideas, and inspiration in your inbox.

Get our latest insights, ideas, and inspiration in your inbox.

We helped Hunter Fan break into the industrial fan space for the first time with this brochure-site-turned-lead-generation engine.
0 %
increase in website leads
0
pageviews
0
unique sessions
healthcare

We created an online quiz about Indianapolis that educated audiences about Bosma’s services for the blind and visually impaired. This project created huge response for an important social issue—on a shoestring budget.
0
Average minutes on quiz
$ 0
Cost per impression
0 %
Quiz completion rate
Healthcare

Vidant Health went through a system-wide redesign. As part of that transformation, we built them a website that served up geo-targeted content around events, programs, and messaging that was specific to each user’s location.
0 %
decrease in bounce rate
0 %
increase in overall sessions
0 %
increase in mobile traffic
manufacturing

We created a streamlined UX while integrating three disparate back-end systems to enhance the online experience for the second largest employer of blind and visually impaired persons in the country.
0 %
increase in organic search traffic
0 %
decrease in bounce rate
0 %
improvement in site navigation
technology

We designed a simpler homepage with benefits-focused content and built multiple microsites to launch their new look and feel.
$ 0 M
in additional sales
0 %
return on investment within 12 months
0 %
Online sales growth
retail

After fully immersing into their brand culture, we bridged the “click and mortar” gap by creating an online experience that paid significant homage to their rich, in-store experience.
0 %
increase in online sales
0 %
increase in total time onsite (TTo)
0 %
growth in national reach
technology

We quickly designed, built, and launched a new website with thought leadership around a complex topic: big data. This solution generated the top-performing MQL generating asset in the company’s history.
1 x
organic traffic increase
0 +
keywords on the first page of Google
0
content downloads in the first month
Manufacturer

This PIM solution for Royal Brass and Hose enabled users to browse products, create shopping lists, and save bulk orders. It also gave the client visibility into customer behavior, with custom logic for increasing fulfillment efficiency.
0
items on the site
0
products and counting
$ 0 M
in revenue in the first QTR after launch
healthcare

We created an automated, customizable, digital experience that empowered this salesforce to improve engagement with their prospects.
$ 0 M
in new opportunities identified in one quarter
0 %
acceleration of b2b sales cycle
0 %
decrease in time to contract signing
Manufacturing

With this PIM project, we passed more data through inriver than it had ever seen before, and we created ACES and PIES pre-processors to aid in data onboarding.
0 B
points of data aggregated
0 +
Automotive brands data integrated
0 +
concurrent users
Manufacturing

We configured a complex PIM solution per ACES standards for this manufacturer of ATV parts and accessories, setting them up to standardize product data across Walmart, Ebay, Amazon, and more.
0
SKUs
0
system users
0
user roles
Manufacturing

This PIM solution for PetSafe streamlined their complex, international product data to save their internal team significant time and simplify the experience for end users.
0
users in the workflow
0
user roles in 14 different areas
0
languages and growing
Manufacturing

We created a custom, centralized PIM and PLM system for Hunter Fan to handle the consistent and accurate output of product data across multiple outbound channels and hundreds of downstream data partner websites and apps.

Our initial consulting engagement showed Peter Millar that implementing PIM could save significant time and money. We are currently working with this client to consolidate their disparate systems into one source of truth.
0 +
total SKUs
0 +
data sources aggregated
0
man hours per year of savings
Manufacturer

We conducted primary research for this parts manufacturer to identify their most profitable opportunities, implemented PIM for their organization, and moved them to ecommerce sales for the first time.